Come along and join the 'Doing Dementia Differently Intergenerational Choir' including pupils from Stockport School and members of Singing for the Brain for a Christmas Sing Along at Stockport Plaza on Wednesday 11th December. 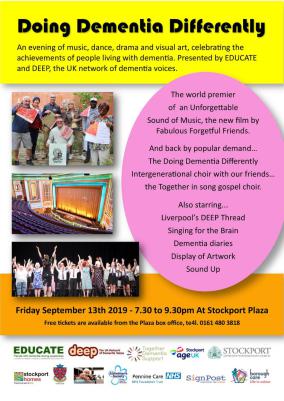 An evening of music, dance, drama and visual art, celebrating the achievements of people living with dementia. Presented by EDUCATE and DEEP, the UK network of dementia voices.
What’s on…Fabulous Forgetful Friends Intergenerational choir, The world premier of an Unforgettable Sound of Music, the new film by Fabulous Forgetful Friends.
And back by popular demand…The Doing Dementia Differently Intergenerational choir with our friends…the Together in song gospel choir.
Also starring...Liverpool’s DEEP Thread Singing for the Brain, Dementia diaries, Display of Artwork, Sound Up 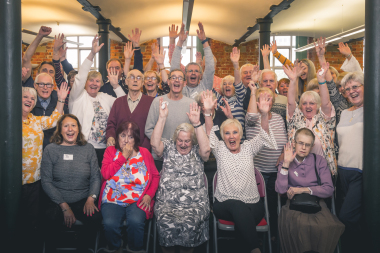 On the  13th June 2019, EDUCATE celebrated its 10th Birthday with a Party at Stockport Hatworks. Old friends and new joined together for a day of fun, celebrations and memories, recorded by Paul and Tony Husband for everyone to enjoy.  To see photos of the event, follow this link:EDUCATE 10th Birthday party

8th July 2018.Congratulations to our wonderful partners at Stockport School, for winning the Manchester Evening News School in the Community award for their contribution to our Doing Dementia Differently intergenerational choir 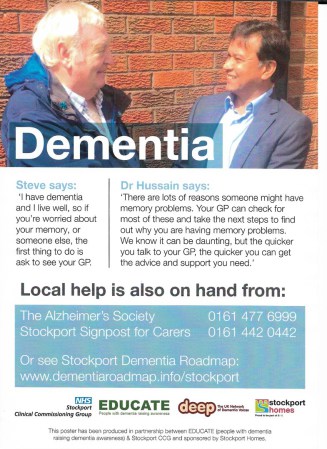 EDUCATE worked with the Dementia Engagement and Empowerment Project, Stockport CCG and Stockport Homes to design a poster for  Doctors Surgeries, aimed at getting help quickly to people worried about memory problems.They can also be displayed in chemists,libraries and community buildings, so please get in touch if you can help. 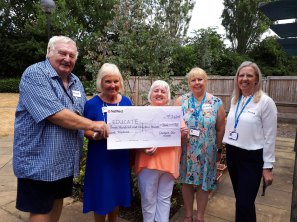 9th July 2018. Anita Rolfe and Elaine Whittaker from Stockport Clinical Commissioning Group presenting a cheque to EDUCATE members.  This money had been at their annual  Awards Evening.

Thanks to the CCG for  supporting EDUCATE. 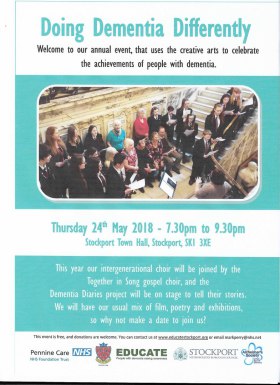 24th May 2018.Over 300 people packed into Stockport Town Hall for our annual Doing Dementia Differently event.This year our intergenerational choir was joined by the Together in Song gospel choir, and members of the Dementia Diaries project told us some of their stories.  A mix of poetry, film and the cheerleaders from Stockport School all made for a very successful evening. 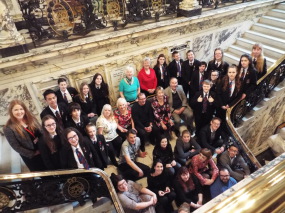 In 2017 EDUCATE  and pupils from Stockport School set up the Doing Dementia Differently intergenerational choir.We want to show how music can help people with dementia to live well.  Here we are performing  on the marble staircase in Stockport Town Hall, for representatives from the EU's Silver Learners project. For more photographs please see Intergenerational Dementia Choir 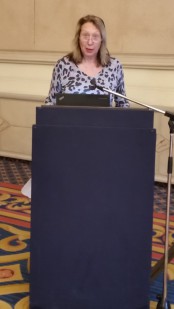 EFID’s mission is to improve the lives of people with dementia by enabling a dementia-friendly  environment in communities across Europe.

See more photographs from her visit: Jo in Bulgaria 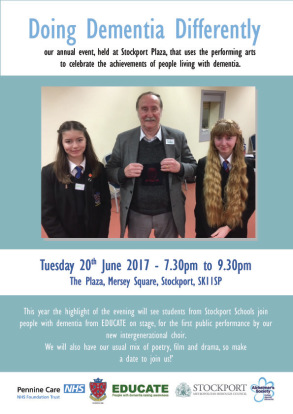 For the third year running, EDUCATE took over Stockport's  historic Plaza variety theatre to celebrate the achievements of people living with dementia.

This year’s highlight was the debut performance of our  Intergenerational choir. The choir draws it’s members from our experts by experience group EDUCATE, the Marple community drop in, Lisburne Court care home, and the students of  Stockport school.

There was also the usual mix of poetry, film and drama.  See videos of our evening on Youtube 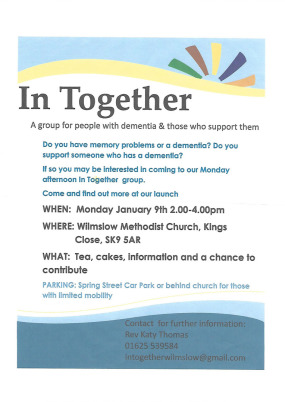 EDUCATE has given financial support to In Together, a new involvement group for people living with dementia in the Wilmslow area.

Ann Johnson, an EDUCATE member, appeared in a video made by Sainsubury's as part of the Alzheimers's Society's Campaign for retailers to be 'Dementia Friendly'

During the day, EDUCATE hosted a workshop for around 70 people with dementia and their supporters.  The programme involved hearing about recent national campaigns including Dementia Words Matter and Dementia Diaries.

Thanks to the European Foundation's Initiative on Dementia, Pennine Care NHS Foundation Trust, Stockport Council, Stockport CCG, DEEP and the Alzheimer's Society for their support with this event. 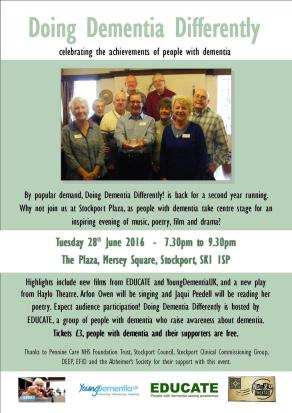 This was followed by:

An Evening of Music, Poetry, Film and Drama

Over 200 people came together at theStockport Plaza for a very special evening.

Highlights included new films from EDUCATE and YoungDementiaUK, and a new play from Haylo Theatre, as well as singing and poetry reading.

See Pictures from this event:  Evening at the Plaza

Sports Relief 2016 - Members of EDUCATE were involved in this years Sports Relief Campaign to give people with dementia a voice. Jo Bennett was filmed telling her story Jo lives with early-onset Alzheimers . Four members of the group attended the Sports Relief evening production in London in March 2016.

12th March 2016 - Members of EDUCATE will be speaking and running a workshop at the Conference entitled Focus on Dementia being run at Bramhall Methodist church.  For full details see their website: Focus on Dementia

Comic Relief is a major charity based in the UK which strives to create a just world free from poverty.  Cash raised through Sports Relief is used to give people with dementia a voice.  Alice tells her story to support this initiative  Comic Relief - Alice's story

1st October 2015 - Comic Relief handed over use of their Twitter Feed for a day to allow people with dementia to tell their stories.  Jo Bennett from EDUCATE went on Radio 5 Live to publicise the event.  Listen to Jo here:  Jo on Radio 5 Live

September 9th, 2015 -  Arfon, Eric and Jo travelled to Cardiff on behalf of the Dementia Engagement and Empowerment Project to help set up a new involvement group for people with dementia.  We had a very positive discussion and a ice lunch.  We are looking forward to news of how our new friends in Cardiff are getting on with their group

Group facilitator Rosslyn Offord wrote
'thank you for your visit yesterday, which was very much appreciated by all of us.  A couple of our group seemed especially inspired by the stories that they heard, and June has already said she’ll speak at a dementia workshop I’m delivering soon as part of the local training provided to clinical psychology trainees.  As facilitators we were also much inspired, and Helen was virtually dancing around the kitchen with enthusiasm after you left!'

EDUCATE and Young Dementia UK have been awarded a grant by the European Foundations' Initiative on Dementia. The grant will help us share our experience and skills with other people with dementia and their supporters. For further details please see the website: EFID Website

EDUCATE are taking part in An Afternoon of Tea and Talk - an enlightening and inspiring afternoon of talks for, and by, people whose lives are affected by young onset. 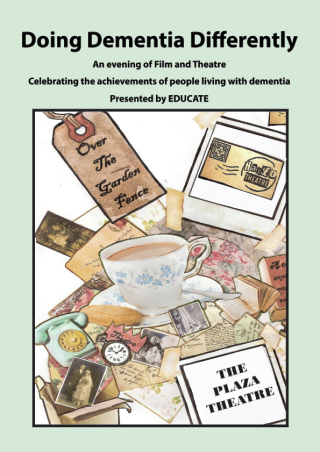 Over 550 people joined in an event called:

‘Doing Dementia Differently’… an evening to celebrate EDUCATE’s 5th birthday and  the achievements of people living with dementia.

We started with 3 short films made by people with dementia, followed by a performance of ‘Over the garden fence’ by Haylo theatre.